Urine drug testing (UDT) is widely used for testing for opioids and illicit drugs. There are two types of UDT: a screening test and a confirmatory test. The screening test uses an immunoassay to look for the parent drug and/or metabolite. Most UDTs screen for marijuana, cocaine, opiates, PCP, amphetamines, while some also test for benzodiazepines and methadone. The confirmatory urine drug test is done by gas Chromatography/mass spectrometry (GC/MS) or high-performance liquid chromatography (HPLC); this test is highly specific and is typically used when testing for the presence of a specific drug is needed.

How far does it go back?

Urine testing detection periods will vary greatly for drug to drug.  Table below will cover the common drugs and detection time.

*Some variances in detection range can occur depending on certain characteristics of the individual being testing. These detection ranges are provided as a general guideline, but should not be considered as a concrete time frame.

There are some prescriptions that contain the same drugs that are commonly found "on the street". There is no easy way to distinguish between the two forms of the drug. However, the problem is not as big as it would seem.

There are no prescriptions for PCP or cocaine. It is extremely rare to find cocaine used in a medical setting, although it happens occasionally, usually to control bleeding from the eye or nose. If used, it will be well documented in the person’s medical file. Such use would cause the urine to test positive for cocaine metabolite for a few days.

Heroin is rarely prescribed in the  States, but again would be well documented. Other prescribed opiates may occasionally cause a positive screen, but are sorted out in a confirmation test.

There are some prescription diet pills that contain either amphetamine or methamphetamine, as well as a drug for Parkinson’s Disease that is a form of methamphetamine. Some doctors prescribe amphetamines for ADHD. Ecstasy is included in the amphetamine class of drugs, and is identified at confirmation.

What if I’m in a room with someone who is using drugs?

Since it takes multiple uses to test positive, and metabolites are checked when possible, it is pretty much impossible to test positive from passive exposure on a limited basis.

Where can I order an at home urine drug test?

You can order one though our online store here

Sort by
Display per page 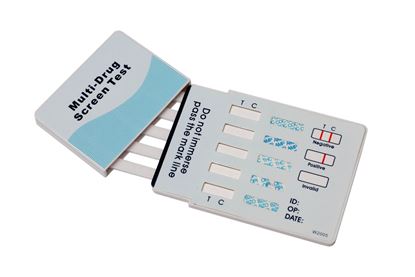 Individuals that want a fast and accurate instant drug test can now be performed from the privacy of your own home. With just one step you'll be able to test your family member or even have piece of mind and pre-test yourself before a pre-employment offer.
$9.99